Are the desktop days over? Email consumption on mobile calls for greater engagement

Whichever way you look at it, online browsing trends are moving away from desktop computers and towards mobile devices.

The combination of savvy smartphones and tablets and ever-quicker Internet speeds is a hefty force to be reckoned with, and it shows no signs of slowing down.

Mobile browsing has transformed e-commerce and social media activity in many ways, and it’s also having a dramatic impact on email marketing. But while the number of people opening emails on smartphones and tablets now outweighs desktop and webmail, it’s becoming increasingly difficult to get readers to actively engage with content…

According to a study from Campaign Monitor, which collected data from over 1.8 billion emails sent in 2013, 41 per cent were opened on mobile compared to 28 per cent on desktop and 22 per cent on webmail. In fact, email opens on mobile devices increased by a whopping 30 per cent between 2011 and 2013.

However, during the same period, click-through rates fell by over 10 per cent. So even if you’re well aware that your subscribers are opening emails on their smartphones or tablets, this marketing technique doesn’t seem to be as effective as it once was.

This could be attributed to the sheer number of emails being sent out these days, but Campaign Monitor’s report decided to delve a little deeper into consumption trends.

It found that nearly a quarter of people who opened an email on mobile would revisit the correspondence at a later date. Those who decided to read that email again on their computer were 65 per cent more likely to click-through. 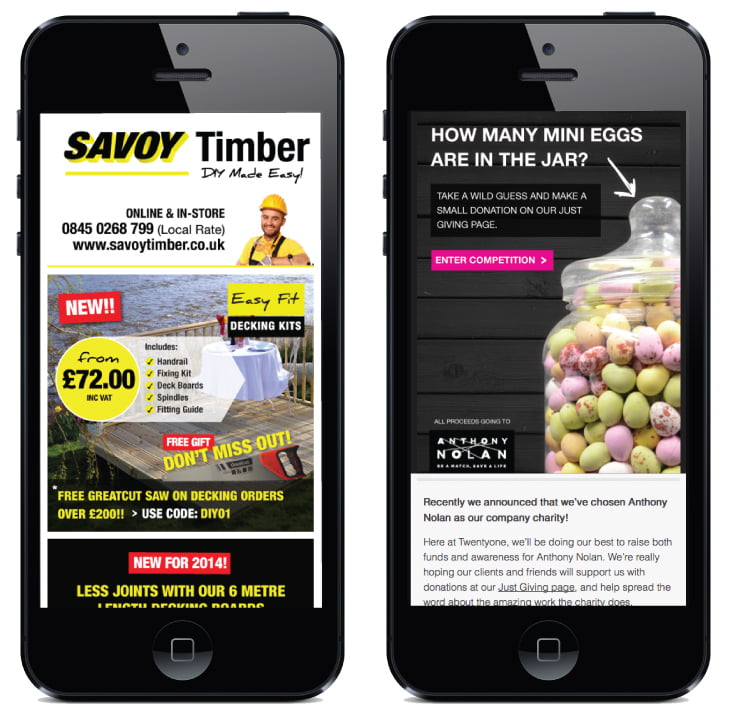 How can you increase your mobile email marketing success?

Firstly, you need to grab your subscribers’ attention with appealing and interesting content. But secondly – and perhaps more importantly – you need to hold their interest long enough that they actively choose to return to that email, engage with what is being said, and then take action. No mean feat!

It all starts with responsive email, which is one of our specialities here at 21 Digital. As mobiles have overtaken desktop and webmail clients as the most popular platform for opening emails, basic one-column email layouts no longer suffices. Instead, mobile users want to see an aesthetically pleasing yet functional design that evokes interest and awareness.

From there, captivating content needs to be added. From compelling copy to intriguing images and viral videos, 21 Digital digital agency can cater for all your content requirements. Even though content creation has become a SEO and social media priority, it should also be a prime concern for email marketing too.

Get in touch with 21 Digital today to discover how we can help your business react to the changing face of email consumption.